We all know them: the quirky and zany characters that pass through our lives on their way to future endeavors that we hope do not involve us. The time they spend with us can be interesting, offbeat, cockamamie, goofy, insane, a little touched and sometimes just plain silly; but more often than not: downright funny.

Remember SP5 T. Thomas? He was that guy that came into our command in Alaska after the Army had started pulling units and troops out of Vietnam and shutting down the Vietnam replacement channel. This had opened up reassignments to areas that had been understaffed because of the training exercise taking place in Southeast Asia. We had been struggling along at just over half strength in my particular unit and we were sure glad to see some new faces arrive.

I last told you of Thomas and the first 500 gallon fabric drum test we conducted after receiving our first 10 drums for cold weather testing in our Arctic environment—that didn’t go so well as you might remember, but no one was injured and we lost just a little time searching for Thomas.

Well, the second incident I will relate to you also included a 500 gallon fabric drum, maybe even the same drum, I don’t know exactly. We had used the drums for Mogas (motor gasoline) support of troops in the field several times after our initial fill test, but still had not put the drums through any real cold weather testing as yet, after all, it was still late summer in Alaska and the (real) cold would not arrive for a couple months yet. We had also not tried any diesel or jet fuel (JP4) yet.

We knew there would have to be some mix of fuel drums eventually, but our current 10 meant that we had to be careful what we used them for this early in the mix. My best guess at the time was a 60-40 mix of jet fuel and Mogas, no diesel at all this early. This would give us the ease of supporting troops (for heat) and chopper refueling operations in somewhat the proportion we currently figured we would experience in the future. We weren’t into aircraft refueling at the time, a shortage of choppers and most of the training taking place near hard facilities; but knew the requirement was just around the corner.

Not long after the motor pool incident, we were tasked to provide petroleum support to troops training on Eklutna Glacier—about 20 minutes north of Fort Richardson on the Glenn Highway. During their glacier and mountaineering training, they were making their home up on the glacier and we were to support them from a spot at the end of Eklutna Lake—west of the glacier—and the mouth of the Eklutna River. We would be about 13 miles off the Glenn Highway on a dirt road that ran along the mountain side and switched back every-once-in-a-while. 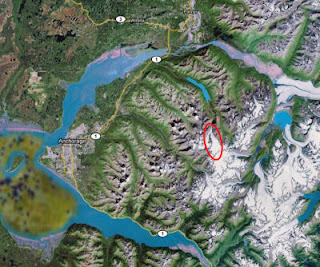 Eklutna Glacier (circled in red)
The LZ is just to the west (left) of the thin blue lake above the glacier.
Glenn Highway (1) and George Parks Highway (3)

I met Thomas and five more of my petroleum specialists (POL guys) at tht same motor pool shortly after morning formation (0700 hrs) where we checked out the two deuce and a halves loaded with two 600 gallon pods of mogas each that we were going to take with us up to the Eklutna Glacier staging area that we utilized for supporting training up on the glacier. Using the drums to provide mogas directly to the training operations would elevate the necessity to ferry 5 gallon gas cans back and forth by Huey or Chinook, a very laborious operation. We brought along a ¾ ton cargo loaded with the necessary empty 500 gallon fabric drums. By 0800, we were on our way with plenty of time to spare.

By 0830 we had reached the staging area and were gearing up to fill two of the three fabric drums. Finished, all we had to do was wait on the Chinook to arrive for hookup.

I took the time again to go over the procedures we had previously trained on as we prepared for sling loading the Chinook. I reminded the guys about throwing the sling donut at the chopper’s hook. Emphatically I repeated: “Do not place the donut on the hook! Throw it at the hook. If you miss the hook, we just try again. The static charge that will build up can cause a real problem. Don’t be a sissy about chunking that donut!” I don’t know how I could have made it plainer.

Since Thomas was the senior POL guy there, he decided that he would set the example and be the first to climb on top of the drum full of mogas and be the first to sling load a drum of gas in the Arctic. I was OK with that. Somebody had to be first and it might as well have been Thomas. 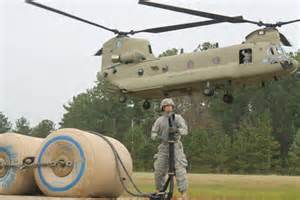 Pretty soon, we could hear the Chinook approaching. Even though we could not see it yet, we knew it was a Chinook. All the POL guys could identify the type of chopper by the noise their rotor blades made. It was just a matter of remembering three or four different sounds—we were still pretty short of support aircraft in the command for the same reason we were short of personnel.

The pilot got me on the horn and I advised him we were prepared to attempt a hookup. He came in slower and slower and finally hovered above us and began to descend toward us. Closer and closer he came. Thomas climbed on top of the 500 gallon fabric drum and was handed the donut with the dangling slings attached. I caught his eye as he scanned the crowd below him and with both arms, I signaled a throwing motion and jumped to the side to indicate he should do the same. We had gone over this so many times, the guys were sick of hearing it.

I watched as the Chinook came to within the appropriate distance and Thomas began to play his part. At that particular point in time, the world seemed to go into time warp and everything proceeded in slow motion. I’m telling ya, one could not believe how slow time began to pass.

I watched in amazement as Thomas lifted the donut toward the hook on the underside of the Chinook. The pilot was doing a fantastic job of keeping the Chinook in place and well within reach of Thomas and his donut. Everything was in que for the first sling load of a fabric drum for troop and equipment support of glacial operations north of the lower 48. I was proud of what we were about to accomplish.

As I stood there, I began to get a feeling of excitement as Thomas reached to throw the donut. I hoped like the dickens that he hit the hook on the first chunk. If he didn’t that was OK also. We were trying something new to us. The guys training in Southeast Asia had been doing this a lot, but we hadn’t. As I like to often say, “the excitement was rampant.”

Closely I observed as Thomas threw the donut which hit dead center but with a sort of glancing blow. Thomas immediately tried to correct the toss. He gingerly nudged the donut completely over the hook with one hand while still holding on to the sling still dangling from his other hand. That didn’t work well at all.

Standing on some of the coiled up sling, the static charge hit Thomas like a runaway rhino and my guy Thomas was launched through the air. Time still moving in slow motion, I watched as Thomas flew—more like floated—through the air with his extremities extended completely as he glided backwards. He landed some 15 to 20 feet just off to the immediate left of his launch point up against a low clump of alders that had managed to flourish on the LZ. Following course, the donut slipped from the hook and followed the suspended and gliding Thomas. I hollered to Specialist Wright to grab the hook, mount the drum and try again as I, and others, also moving in slow motion, hustled toward Thomas to determine his condition.

Wright performed a perfect chunk, dismounted the drum and returned to his original position and gave the pilot the crossed-arm signal that the drum was attached and he could slowly lift up and away. We had accomplished our first sling load of a 500 gallon fabric drum beneath a Chinook, but Thomas was not the first. Had he been standing directly on the drum instead of the crumpled-up sling apparatus, he might have been grounded enough to avoid the static charge. As with Thomas’s usual luck, he was not and thus laid crumpled over to the side of all the action with a couple of scrapes and bruises, but no real injuries to speak of—other than his ego.

Later he related to us that he had been conscious the entire time and did get to see Wright follow him up and get the job done. He just sat there and laughed. I laughed right along with him while looking straight into his eyes. He laughed the entire time he nodded his head and repeated his instructions back to me: “I shoulda thrown it sir, and let go! I got too excited.”

I just nodded my head and pulled him to his feet. I didn’t have to reiterate the instructions. He knew them well. When the Chinook came back for the second drum, Thomas gave it another try and made a perfect throw and a pinpoint landing right beside the drum as the chopper prepared to lift away.

Luck was just never on Thomas’s side. But, this time when the heat was turned up, Thomas was the kitchen!

I very much welcome your thoughts and observations.
Posted by John Howard at 2:18 PM