Next Year (It’ll get Better!)


I knew that if I could just get through my fish year in the Corps of Cadets, my life would get easier and easier over time. Boy! Was I wrong?

Life doesn’t ever get easy. This is one of life’s best kept secrets. Life only gets harder (and harder). With progression comes responsibility. Experience changes all perceptions—except for those lacking integrity.

The misconception of an easier life became magnified after I graduated from college and entered the Army, having been sent thousands of miles from home in a cold and (almost) desolate land—Alaska. I now found myself at the age of twenty-three responsible for my wife and son plus the fourteen other members of my section and their families members that they had drug along with them.

Just a couple of months later, my boss managed to get himself relieved of his position and I was forced to sit back and realize that all thirty-two members of the platoon (and their tag-alongs also) were now my responsibility also.

It wasn’t long before I was receiving calls from a distraught mother whose daughter’s husband, a member of my ammunition section, was mistreating her daughter. She lived in New Jersey and called at 0730 (her time), hoping to catch me before I left for work; never realizing that her 0730 was my 0130. I sleepily listened to her problem and promised to follow-up on the same. These calls went on for several weeks; always at 0130 or about that time. I counseled the young man, reminding him of his responsibilities, but eventually had to restrict him to the barracks. His young wife, living off the post, not having authority to have followed her husband to an overseas command soon moved back to New Jersey with her mother. There were others of this nature, but you get the idea.

I took time to reminded my entire group that just because they had my home phone number didn’t mean they were authorized to share it with just anybody—particularly mothers-in-law.

At some point that next summer, I’m not sure exactly when, the realization began to dawn on me that all eighty-five hundred members of the Brigade were my responsibility also. I had gained a much more realistic view on the obligations and authority that were inherent within my position.

I was forced to evolve: physically, mentally and integrally. Life never got easier the next year. 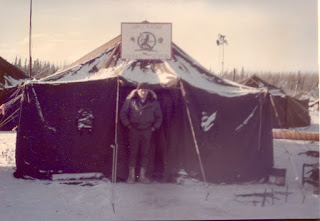 
PS: I held that position for another three and a half years and my responsibilities grew with each year and the platoon grew right along with them; eventually surpassing my authorized strength of 70 to 75. This was largely due to the curtailment of the Southeast Asia field problem. You get chances in life to improve your lot; some you bring about on your own and others come strictly from the circumstances of the time. I quickly found out that “it’s the people dude” that make the difference. They run the spectrum from great to pitiful and a great deal of them reside at quirky. From quirky to great is where the real opportunity lies. The troubled ones may take a great deal of your time, but I found that if you pay close attention to the quirky, you’ll be rewarded over and over with lessons that cannot be learned any other way. I was lucky enough to have the occasion to have been associated with more than my share of quirky characters.
Posted by John Howard at 2:21 PM No comments: