We all know them: the quirky and zany characters that pass through our lives on their way to future endeavors that we hope do not involve us. The time they spend with us can be interesting, offbeat, cockamamie, goofy, insane, a little touched and sometimes just plain silly; but more often than not: downright funny.

SP5 T. Thomas was a guy that came into our command in Alaska after the Army started shutting down the Vietnam replacement channel and opened up reassignments to areas that had been understaffed because of the training exercise taking place in South East Asia. We had been struggling along at just over half strength in my particular unit and we were sure glad to see some new faces arrive.

Thomas was a specialist 5th class in the transportation corps—you know how I loath truck drivers—and was assigned to my unit as we had a handful of truck drivers within our petroleum section. We had four 5000 gallon tankers and eight 5 ton cargo converted tankers (1200 gallons each). Each of these vehicles were authorized a driver (MOS 64C) and intended to carry a petroleum specialists in addition to operate the dispensing equipment. I had several drivers when I inherited the unit, but they all had been reassigned to the Asia exercise since that time.

Having additionally received just recently several other truck drivers from basic training and AIT, my Platoon Sargent, SFC Butler, recommended that we assign Thomas to be in charge of these drivers so that our span of control was kept in tack and we didn’t stress the POL Section Leader any more than he already was—that’s what we did.

Coincidentally, we had just received 10 each 500 gallon fabric drums for petroleum resupply to remote areas. These were the first the command had ever had and none of us had any experience with. I had only seen pictures of them. 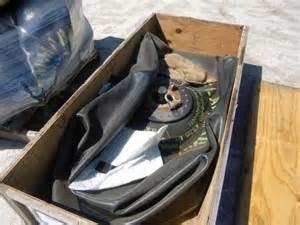 They didn’t look like much, just lying there in their shipping crate. But, now we had ten of them. About mid-morning, I ask Thomas to get a couple of petroleum specialists and a driver or two and lets meet at the industrial area gas station we operated and see if we could get a better understanding of the fabric drum. I had selected the gas station area so we would have telephonic communications available should we need them, plus there was plenty of area available should we need it.

I discussed what I wanted to do and made sure the guys understood what I was after. I just wanted to see how well we could handle this new piece of equipment and just how easy the task of hooking up to, filling the fabric drum, and maneuvering a full drum around by hand would be—not a full operational test, but good enough for us to get an idea about the equipment.

Thomas went around to the back of the motor pool building where all our rolling stock was parked and located a 1200 gallon tanker that was sufficiently full to use to transfer gas into the fabric drum. This also gave me a good opportunity to spot check how their maintenance was being accomplished on the fuel systems on any given tanker unit.

Thomas arrived and the guys started hooking op the refuel apparatus to the drum’s inlet connection. The pumping unit on the tanker started on the second pull—I was happy, but didn’t comment. The Mogas started flowing right away. I had read that it was best to fill the drums to 450 gallons and no more, especially if there was any chance of air transport involved. Well, we planned no air movement today, but I wanted to reinforce the standard from the start. I told Thomas to watch the gauge and shut off the pump when we reached 450 gallons.

Now, don’t get me wrong, Thomas was no dummy—not by a long shot. He was a smart guy. He just seemed to get himself (and others) into odd situations that others never came close to. I trusted Thomas to supervise troops or I would not have placed him in the position he was in in the first place. Here, I wanted him to have the best guidance possible and reinforce that guidance where ever I could.

The pump pushed right at the 50 gallons a minute it was rated at and we were quickly at our desired goal—450 gallons—and Thomas shut off the pump. Again, I was happy, but said nothing—expecting the guys to intuitively understand the situation. 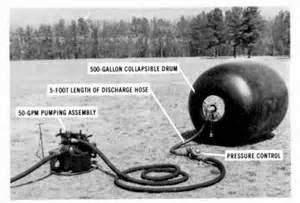 The five or six of us ganged up on the now full and tall drum and pushed it somewhat quickly about fifty yards across the yard in front of the motor pool building. Then we pushed it in an arc covering approximately 75 yards back to where we started. It rolled pretty well once we had it moving. Periodically on the way back, I would pull two or three guys back and see how different groups of two could handle the drum on the fairly flat terrain we were working on. All good!

After we had moved it several times here and there, I noticed the traffic leaving the motor pool and realized that it was chow time. I ask for a volunteer to stay with the drum while the rest went to chow, all promising that they would return as quickly as possible. Thomas volunteered to allow his guys to go to chow while he watched the drum waiting their return.

As we drove off to chow, I noticed Thomas climbing up on the top of the drum and there he sat with a smile on his face as we drove away.

Right dead in the middle of the Alaskan summer, the sun was shining bright and the temperature was about as hot as it gets on the south coast of Alaska—not hot by Texas standards mind you, but warm enough to break a sweat with a little elevated exertion.

I was the first to return and when I crossed the road into the industrial area, I noticed the unattended drum right away. Where the devil was Thomas? Crossing under the red light, I could not see him anywhere—just that fabric drum sitting out in the middle of the yard in front of the motor pool building.

I pulled into the gas station area, parked my POV out of the way and climbed out to start the search.

All of a sudden from the back corner of the motor pool, there came Thomas running up to me. He looked very agitated and sounded that way as well.

“Hey Sir! I thought it was gonna blow!”

“What do you mean, it was gonna blow?” I responded.

“I was just sitting up there and the drum kept getting bigger and bigger. I decided it was time for me to get down. I tried to call Battalion and get you guys back down here. They went to find you and I decided to watch from behind the corner of the building.”

I could tell that he was not inclined to believe what was happening as I tried to figure out how I was going to explain the goings on.

I was interrupted by the Battalion Commander and my Company Commander’s arrival at the most dangerous spot on our little face of the earth. I caught them soon after they exited their vehicles and explained what the situation was and that there was no threat of explosion or imminent disaster. Both were satisfied and departed the area appropriately.

I turned back to Thomas, still as pale faced as any one white guy could be and began to calm him down and explain the cause and effect prior to the rest of the guys returning from chow.

The movement of petroleum required that we take temperatures often, especially when we moved fuel from above ground to below ground. This allowed us to convert quantities to an ambient temperature of 60 ºF to account for the difference in density and weight depending on where the fuel was stored. Like everything else, petroleum expands and contracts with a change in its environmental conditions. We did this as a routine every morning at each gas station (fuel stored below ground) just like every gas station (military and civilian) operating all over the continent.

Thomas knew all this. He had been involved in the exercise of taking and converting the temperature and volumes of fuel routinely since he had been assigned to my unit—I made sure all the petroleum guys had their chance and understood the phenomena.

When the drum began to react to the warming of its environment, Thomas had completely forgotten his knowledge and training. The drum expanded and Thomas relocated what he assumed was a safe distance away.

I reminded him that that was the prime reason I had indicated that we were to put no more than 450 gallons into the drum—to allow for expansion. He shook his head understanding and remembering every word as I laid the logic out for him. I was surprised that he didn’t slap his forehead as I talked my way through the explanation.

When the heat was turned up, Thomas got outta the kitchen!

I very much welcome your thoughts and observations.